Rowdy is an integral part of the Bristol graffiti scene. His work appears worldwide and can be found in the most unlikely places, from underground rural settings to highly visible urban reaches. Rowdy’s trademark crocodiles are often huge in scale and are indicative of the playful nature of the imagery in his work.

In his own words - 'My work appears in the traditional gallery sphere as well as in many outdoor spaces through out the UK and beyond. What started out as vandalism in the 80s has now reached a main stream status. It used to be a scene run by us for us.
The City is not only my canvas it also provides the necessary visual stimuli that appear in many of my interior works.' 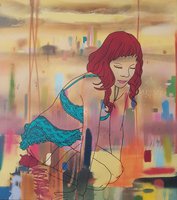 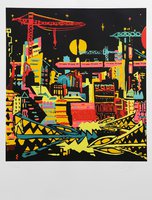